In ohyay, users typically move themselves via the Rooms List or by clicking on links, but admins can also force users into specific rooms via breakouts. In many virtual events, breakouts are an important part of facilitating connection and creating stronger bonds among guests.

Breakouts are initiated by creating a Breakout Button. This button will hold the logic for the desired form of breakout and clicking this button during an event will cause the logic to run.

A basic breakout in ohyay is similar to what you might have seen on Zoom: an admin hits a button to send people into smaller groups across different rooms, and brings them back into the main room after a specified period of time. The difference from other virtual platforms is that breakout buttons in ohyay are typically pre-configured.

There are three pieces of core functionality to a breakout:

It is very common to not only send users into rooms, but also to move a user into a singular slot (e.g. during a presentation).

When you run a breakout, you’ll want to keep a close eye on the Admin Rooms List on the left-hand side of your screen. The Admin Rooms List is a list of the rooms in your workspace where admins (not guests) can see user thumbnails populate, indicating that a user is in a room. 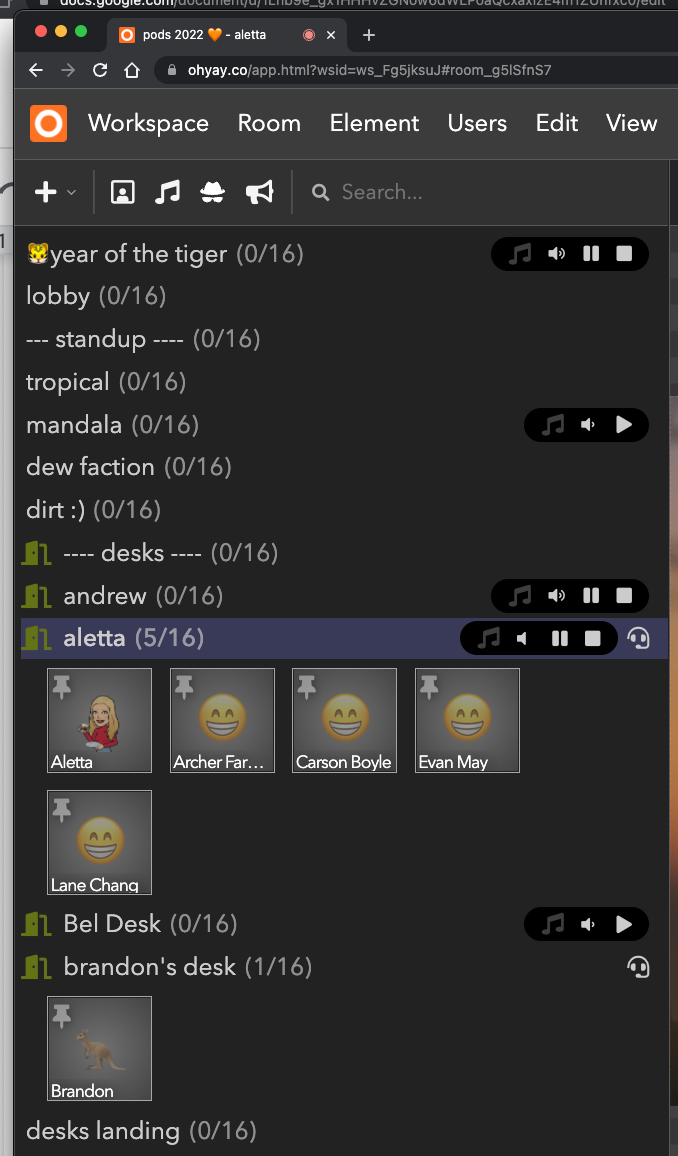 Breakout buttons are used to move users across workspaces in a variety of ways, and can be as simple or as complex as you want them to be. They give you the power to send users to specific existing rooms in your workspace or to new, temporary rooms. We will walk through some of the scenarios in which you might use breakouts.

Speed Dating: Users are mixed up with new partners every few minutes

Presentation: A speaker is brought up to a specific slot in the room

Social Rooms: Users are randomly distributed into social rooms (e.g. after a keynote at a conference)

Bring All Here: All users are brought to a single room in a workspace (e.g. to an auditorium from a lobby room)

You’ll typically want to drag your breakout button into the Notes and Controls panel at the bottom of the screen, so that it is only visible to admins and directors. (You can think of the Notes and Controls panel like the notes section of a Powerpoint slide). However, you can also drag a breakout button into the canvas to allow any user to push it themselves. 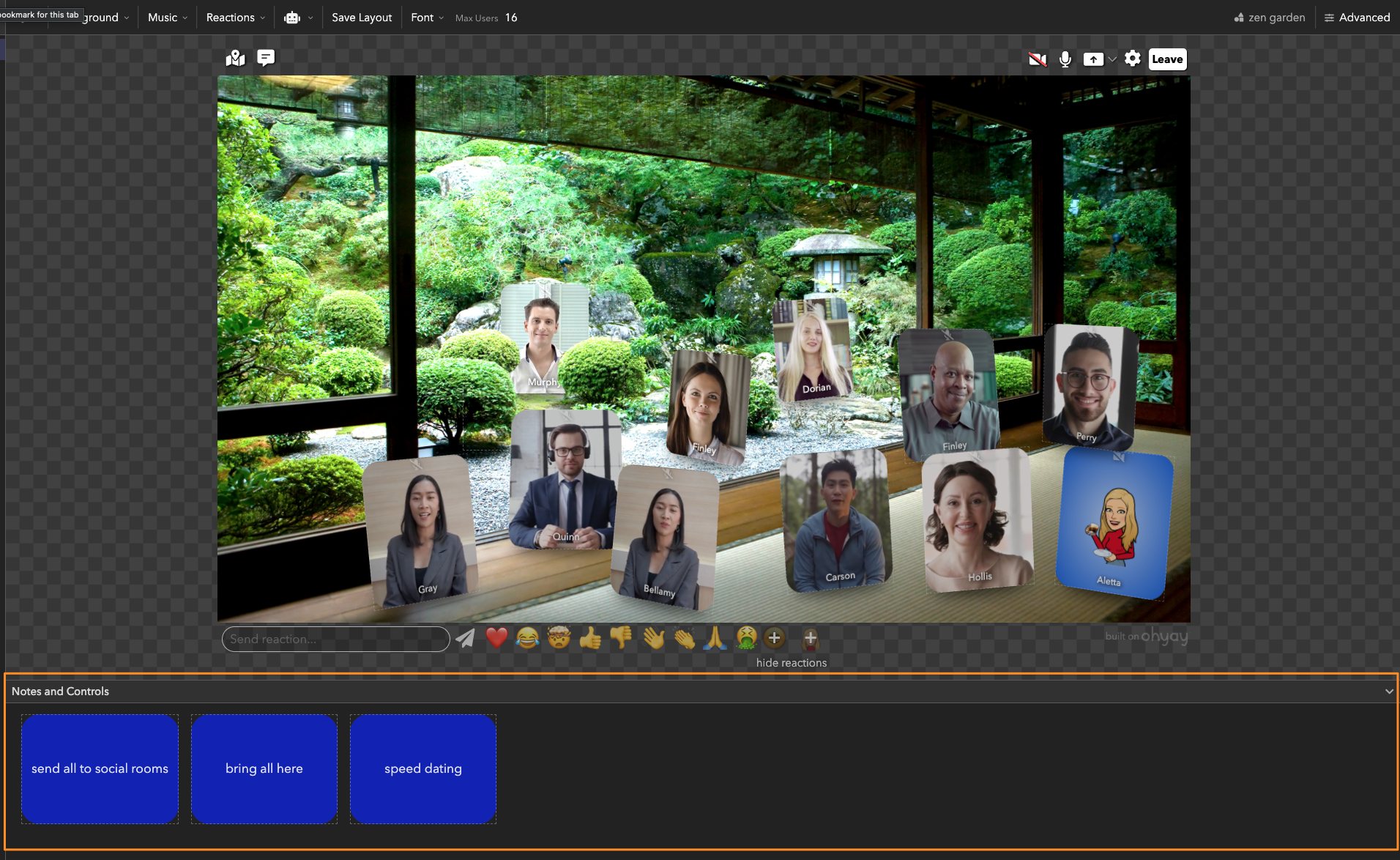 Creating a breakout involves the following steps, which we will outline below:

To add your breakout button, click on the “+” dropdown at the far left of the toolbar at the top of your screen and select the

You’ll see a gray button (that says “breakout”) appear on your screen. As discussed above, you can drag the button into your Notes and Controls panel so it is visible to only admins.

It is best practice in ohyay to name your elements, especially breakout and action buttons, so that you can keep them organized.

To name your breakout button:

Now, in the layers panel on the lower left of your screen, you’ll see that the button is labeled as “Breakout Button Test.”

You’ll also want to edit the text on the breakout button so that you’ll remember what it does. In this tutorial, click on the button to get a cursor and type in "move all users in current room".

The first step to configuring any breakout button is opening it up. To do so, follow these steps: 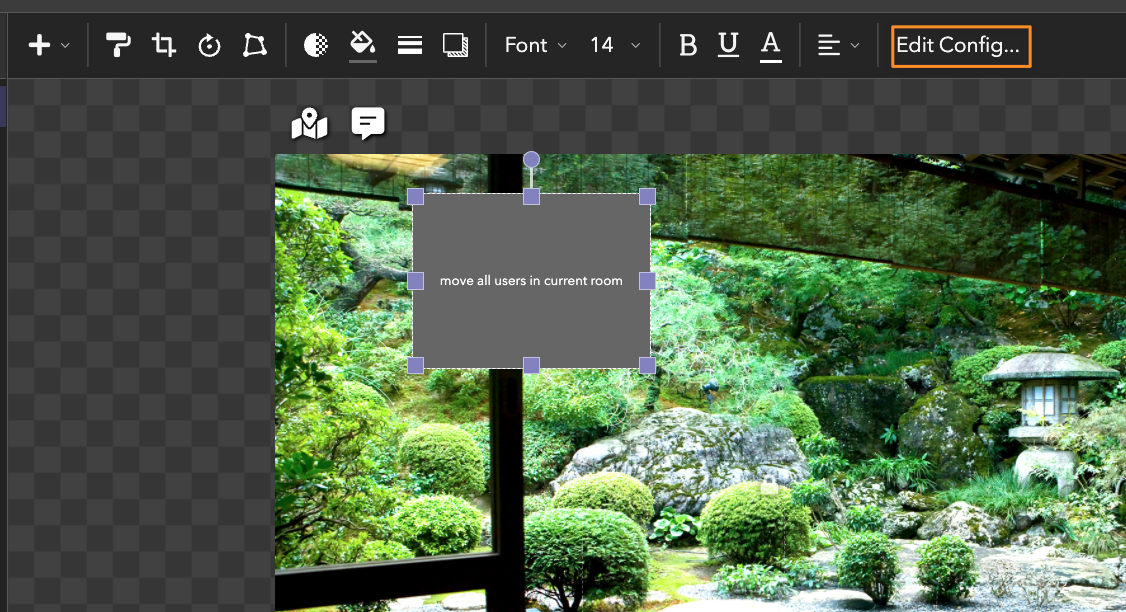 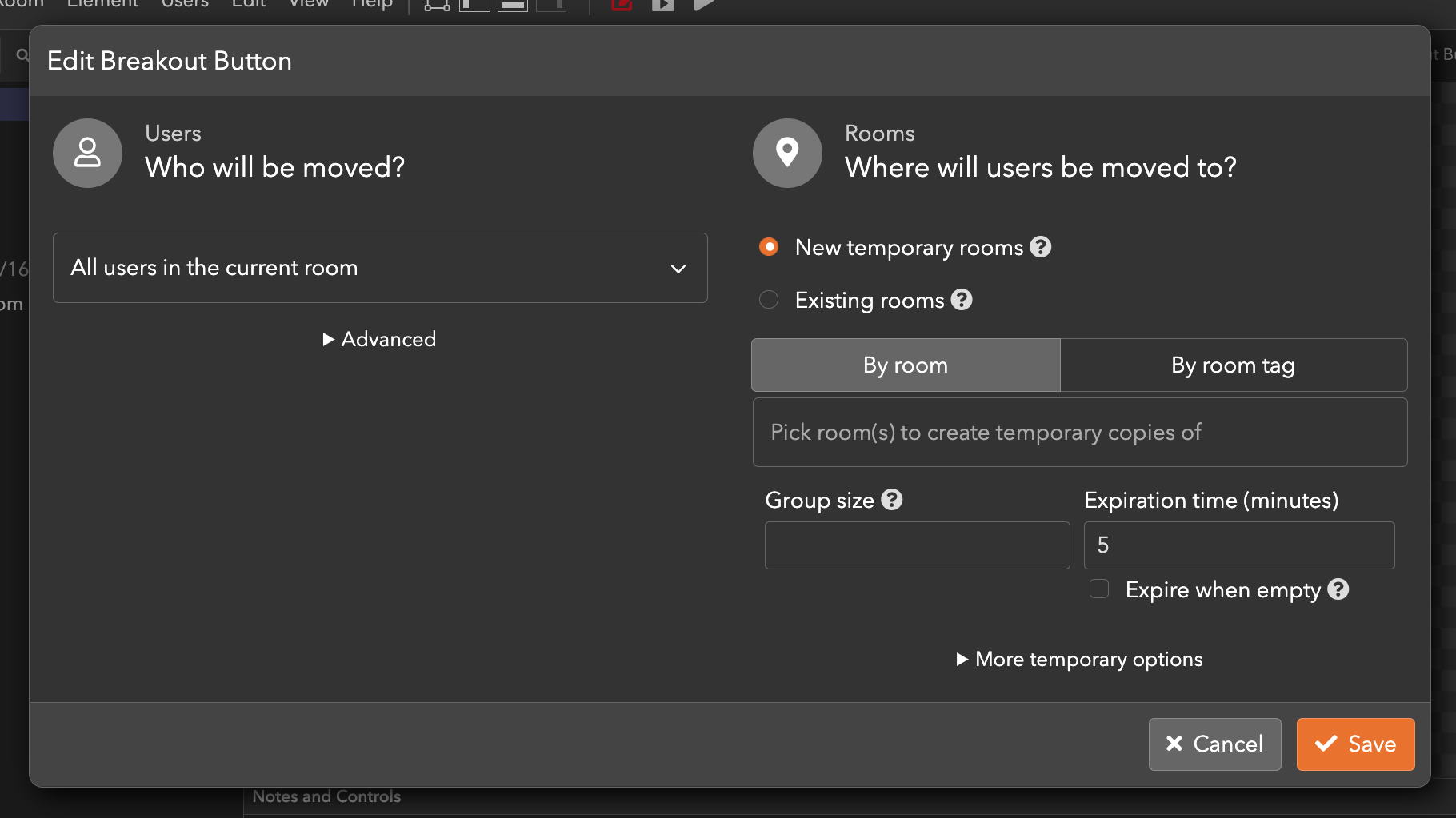 Who will be moved?

The first section in the breakout button configuration deals with the users that you want to move. You’ll likely want to figure out who you’re moving before you decide where to move them.

For the purpose of this tutorial, select all users in the current room from the dropdown. 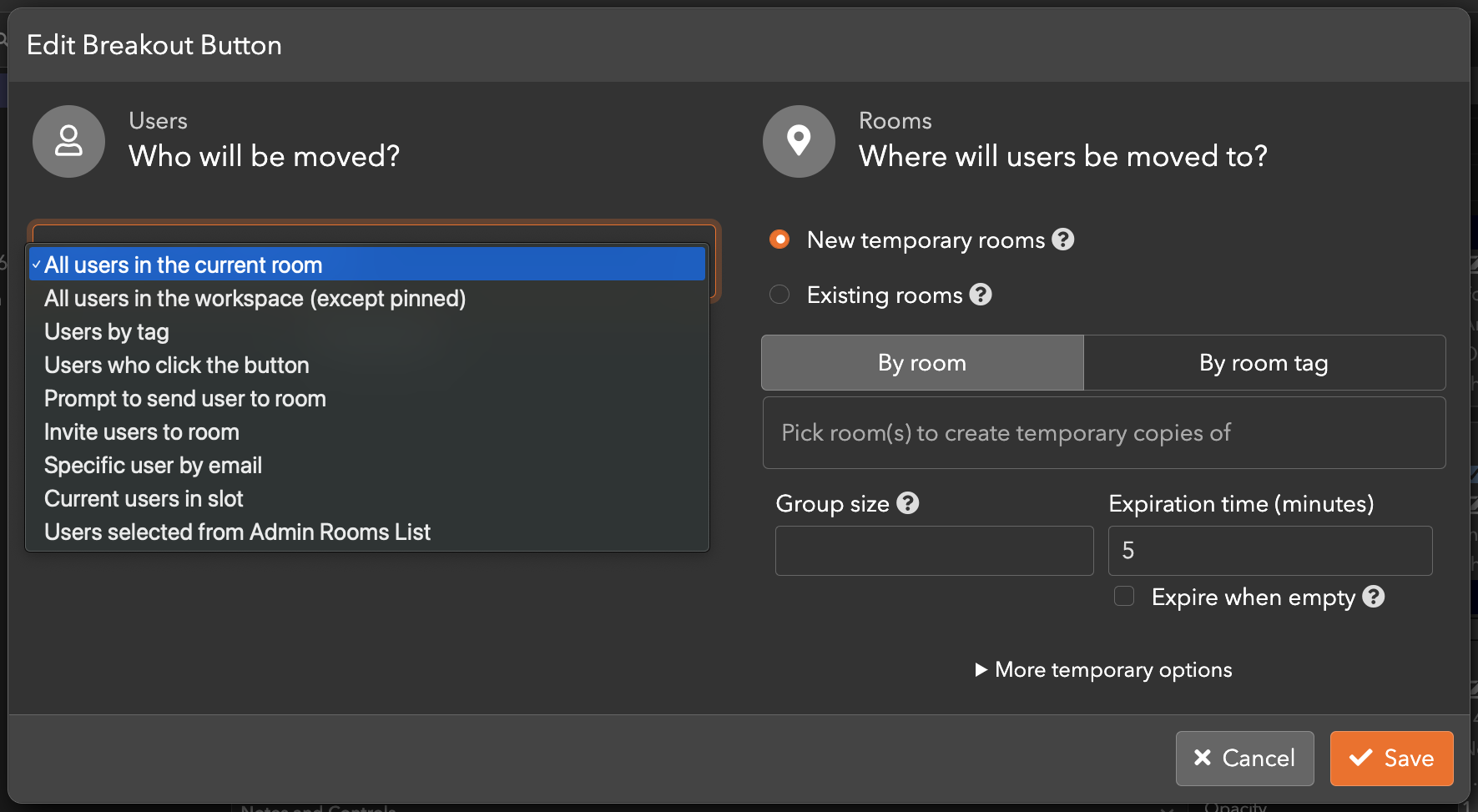 Here are all of the options in the dropdown, explained:

Where will users be moved to?

Now that you’ve chosen who you’re going to move (All users in the current room), it’s time to select where people will be moved to. For the sake of this tutorial, select Existing Rooms, click on Pick room(s) to move users into, and select any room in your workspace. (If you don’t yet have a room, you can add one by clicking on Room > New Room from the menu).

You’ll see two main options in this dialog: to move users to new, temporary rooms or to move them to existing rooms in your workspace.

The new temporary rooms option allows you to create temporary copies of selected rooms in your workspace that eventually expire. This option is usually preferred if you have a large, unspecified number of guests, as rooms will be created based on how many people show up and based on your specified target group size.

To send your guests to new, temporary rooms, click on the “Pick room(s) to create temporary copies of” text box and select rooms from the dropdown, one by one. For example, if you’re running a speed dating session, you might choose to send users into copies of three existing rooms. 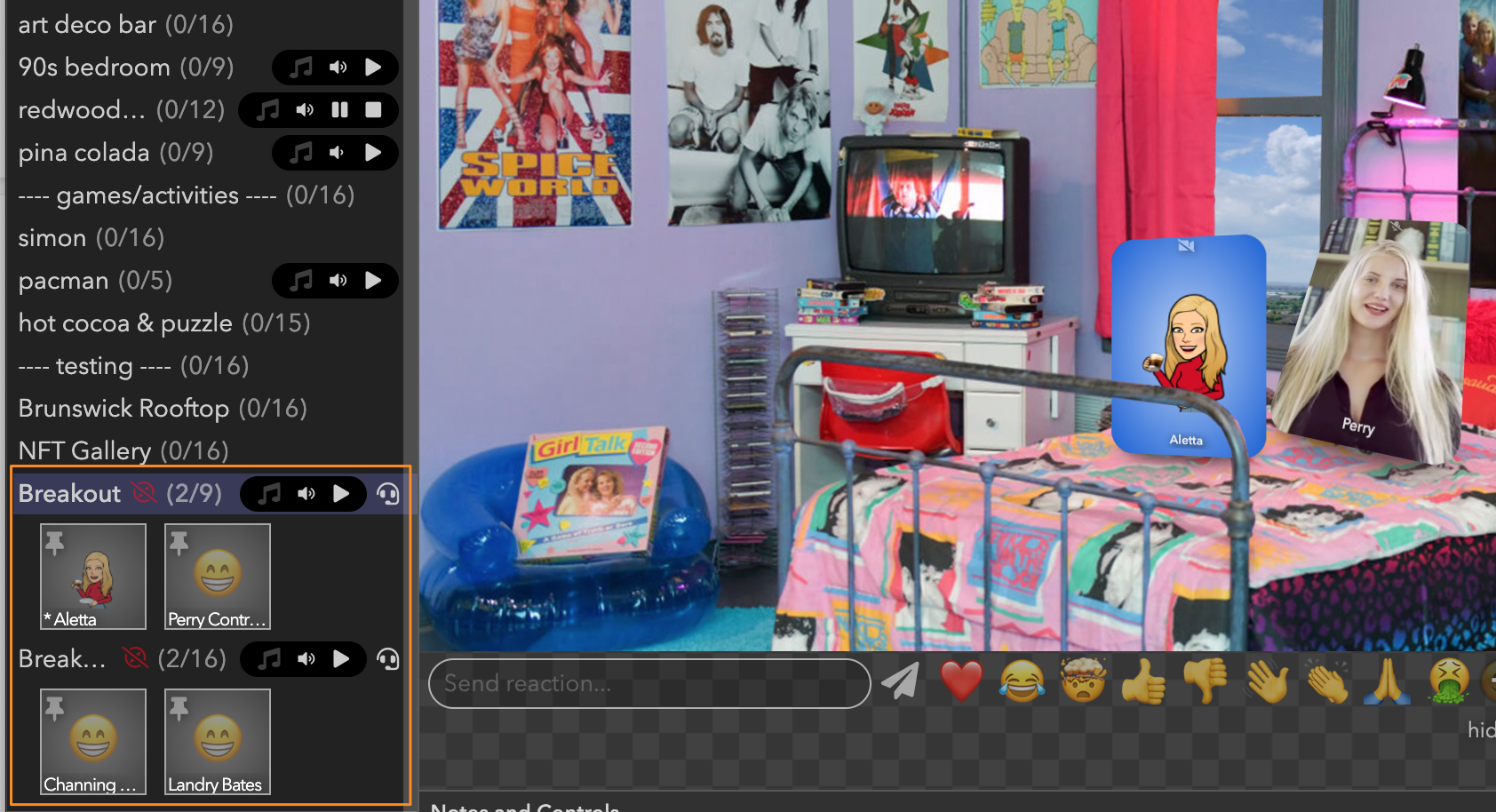 For new, temporary rooms, you can also specify the group size (the average number of people placed in each room) and the expiration time (in minutes). If you check the box next to expire when empty, the temporary copy will expire when all users leave the room.

In the below example, an average number of 2 users will be placed into each room, and each room will last for 10 minutes. Expire when empty is not checked, so rooms will stay in the Rooms List when all users leave. 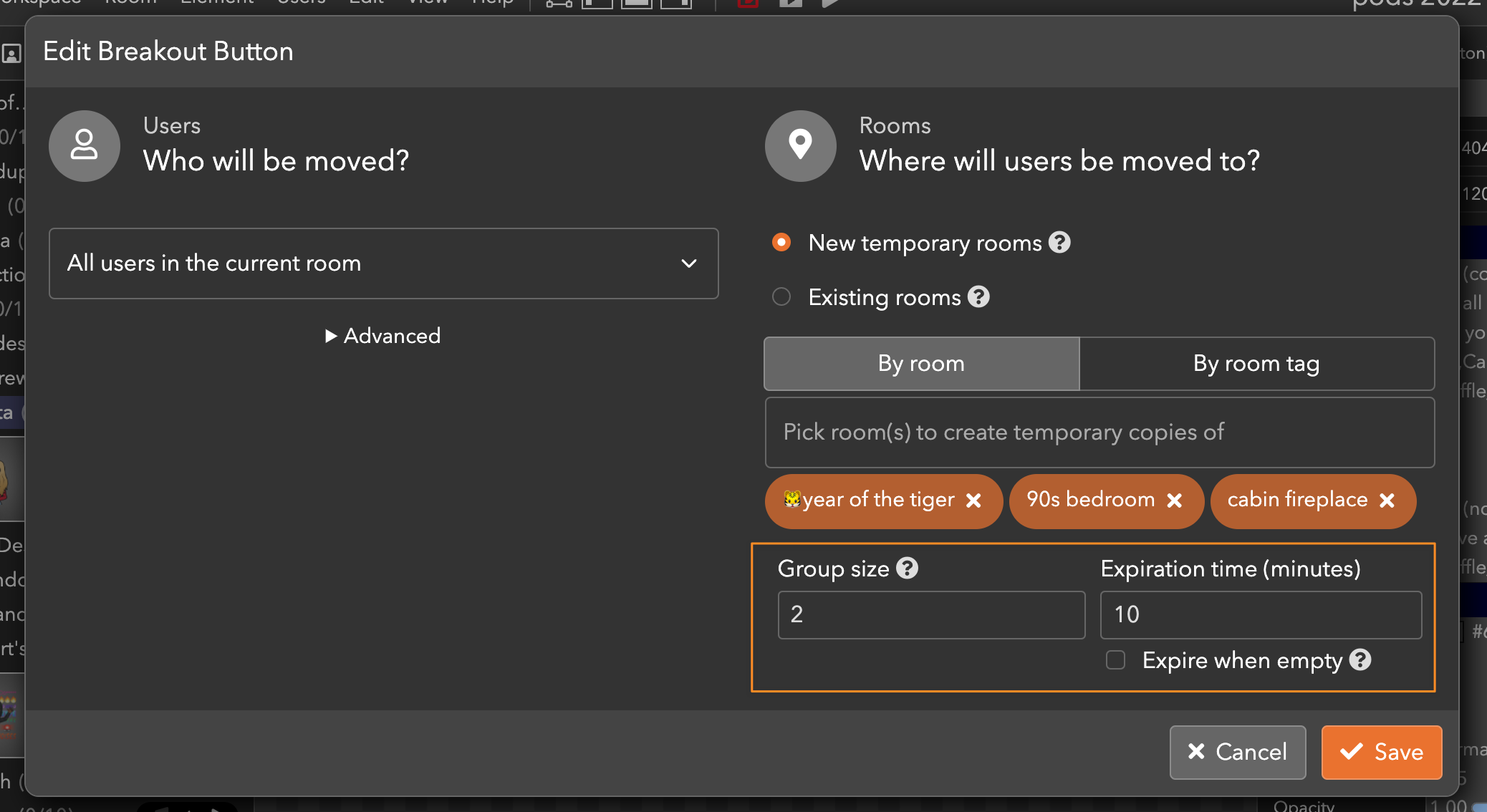 If you click on the more temporary options under group size and expiration time, you’ll see a few more ways to customize your breakout:

Temporary room title: The name of the room that will appear in your Rooms List (if show breakout rooms in Rooms List is checked).

Fallback room: The room where users will go when the breakout expires.

icon on the top left of your screen). 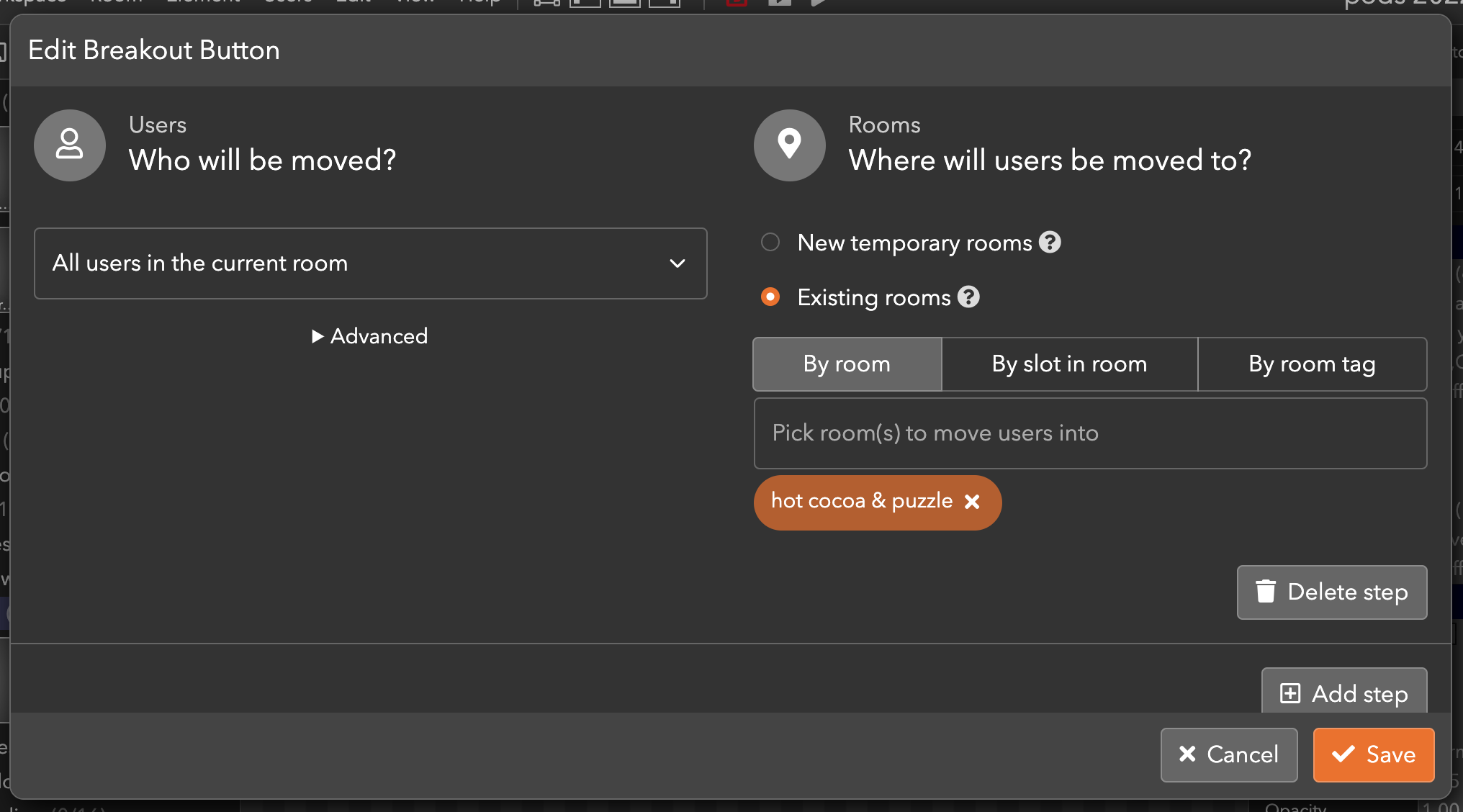 This option is preferred if you have a small, specified number of people heading into a breakout. It can be cleaner and easier to manage, as new rooms will not be created in the Rooms List and will not expire. As an event producer, you’ll simply see the thumbnails of your guests move into the existing rooms that you’ve specified.

In the Advanced panel, which you can expand by clicking on the down arrow next to Advanced, you’ll see a few more options for your breakout.

Target group size: If multiple rooms or tags are selected, users are divided into groups and distributed across them. Each room will end up having this rough number of people. For example, if you want an average of six people in each room, you can mark 6 as your target group size.

Match mode: Match mode is the way that users are split into groups. You can select among three different match modes: 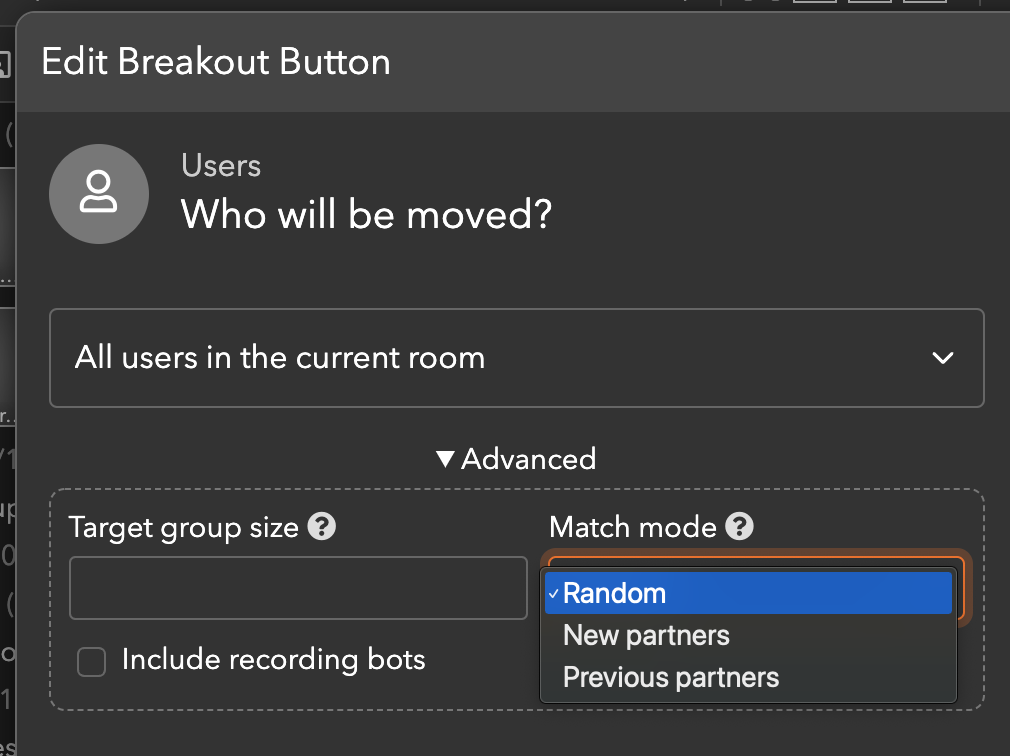 The complexity of your breakout button is in part determined by how many steps you add. To add a step to your breakout, click on Add Step in the bottom right corner of the dialog.

To delete a step, click on Delete step under each step.

Testing and executing the breakout

Now comes the exciting part: executing your breakout and moving users into different rooms or slots.

To test your breakout, you’re going to want to add test bots to your workspace. Test bots are fake users that can do everything that real users do. To add test bots, click on the icon that looks like a robot in the toolbar as many times as you’d like. You’ll see the bots appear in the Admins Rooms List on the left-hand side of your screen and on screen if you’ve added user slots.

To execute the breakout, switch into Director Mode by hitting the

icon in the Toolbar or by hitting the Option key. Then, click on your breakout button.

You should see the test bots in your current room move into the room(s) that you specified in the breakout button.

Bringing your users back

If you’d like to bring users back to your room after the breakout, you have a few different options:

You can also create a breakout button that brings all users back to the room: 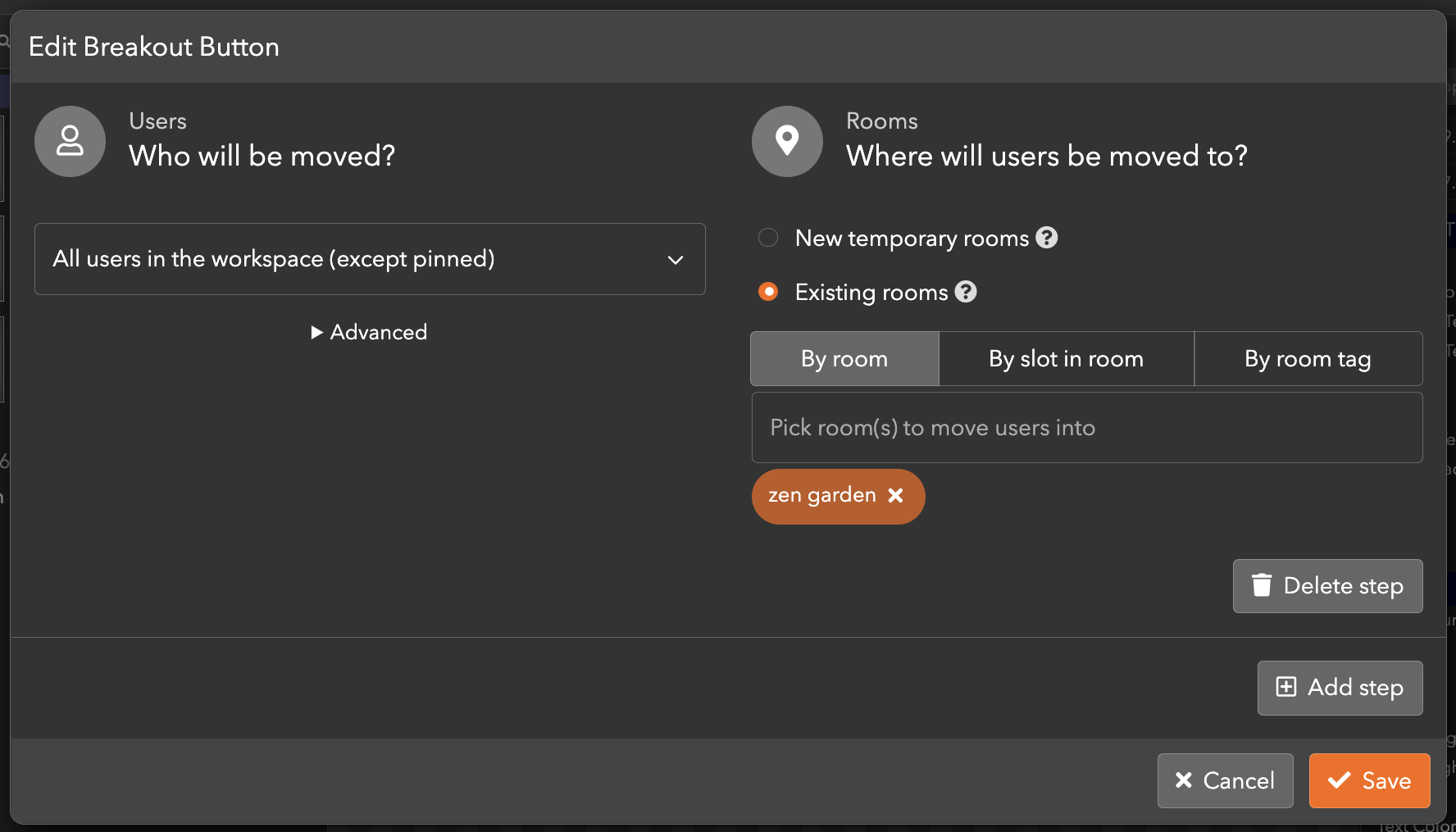 Click on your breakout button, and then click on Advanced on the top right of your screen to see additional properties that you can configure in the Advanced Properties panel.

Confirm on Run: Text reading “Are you sure you want to do the breakout?” that appears when you click on your breakout button, before the breakout is executed. By default, you will see the confirm on run text when you select all users in the workspace (except pinned) as a protection mechanism, so you don’t accidentally move everyone in your workspace. 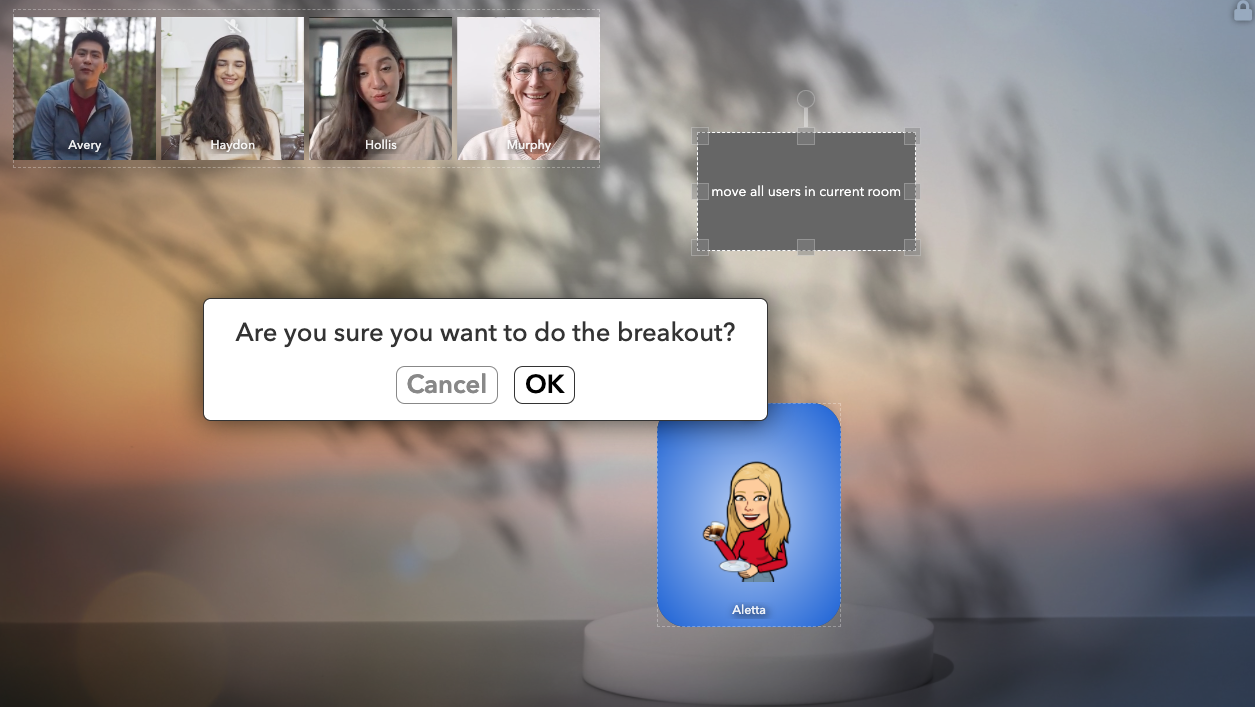 Confirm Text: You can customize the Confirm text by simply highlighting the text box reading Are you sure you want to do the breakout? and typing in your text of choice. 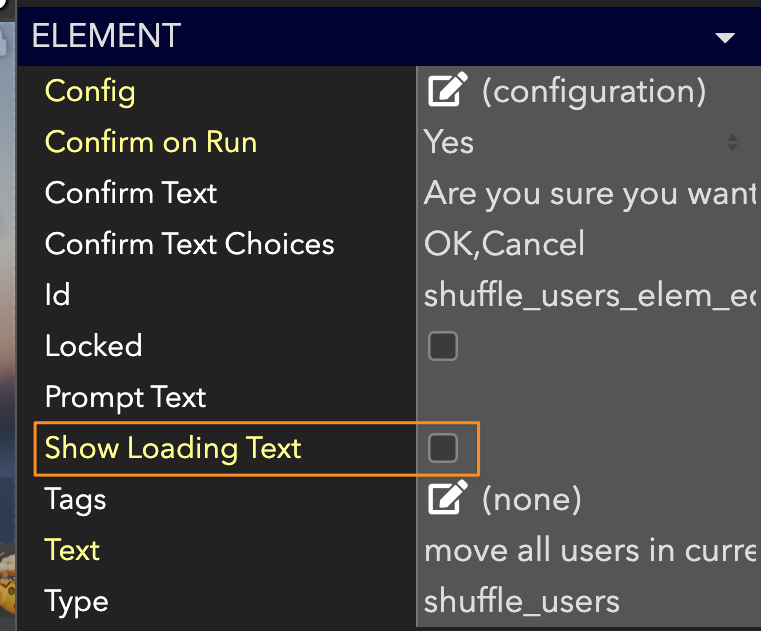 If you’re running a breakout with new, temporary rooms, you can insert a countdown element (in the room that is being copied) that automatically displays the time remaining before the breakout expires. 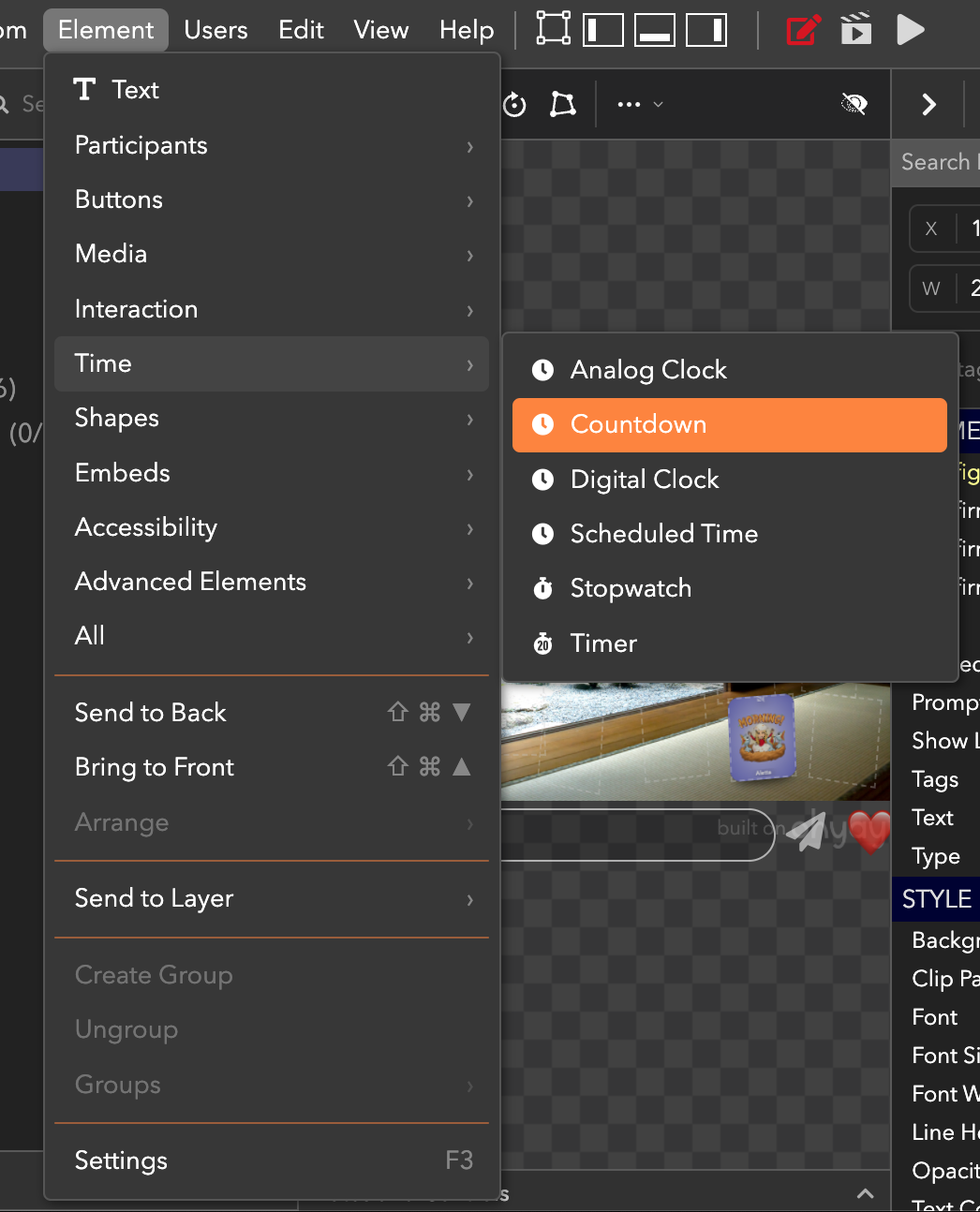 At the beginning of this guide, we named some common use cases for breakout buttons. Below are some common button configurations for those scenarios. Of course, the details (e.g. the selected rooms, the users moved, etc.) will depend on your individual space.

This breakout button moves all users in the current room into new, temporary rooms that are copies of the zen room. It will produce rooms with an average of 4 people and with an expiration time of 10 minutes. The rooms will appear in the Rooms List for all users and previously created breakout rooms will be reused before creating new rooms. Every time the button is hit for another speed dating round, users will likely be matched with a new partner. 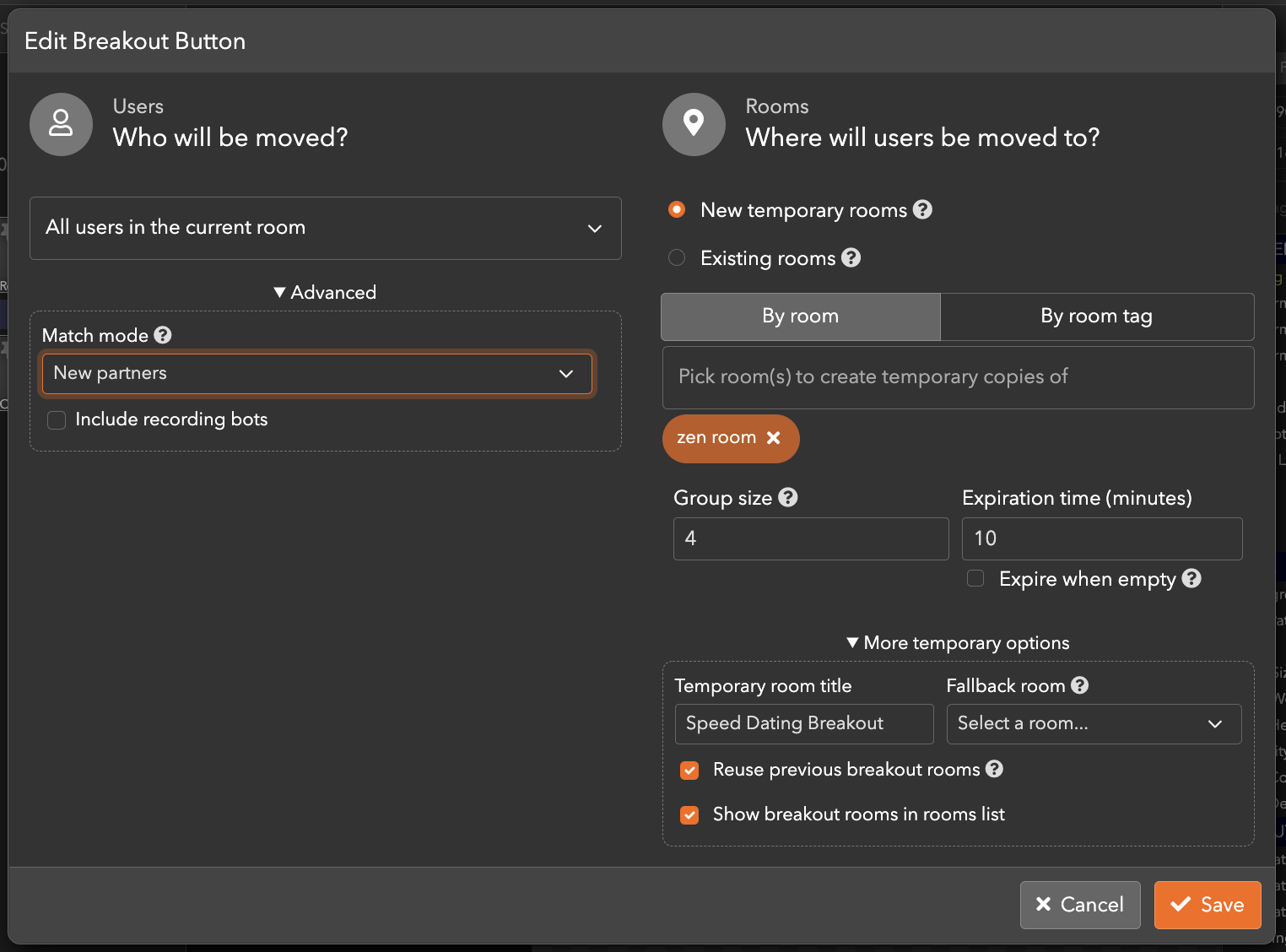 This breakout button moves a speaker (via their email) into a speaker slot (named SPEAKER) in the waterfall balcony room. 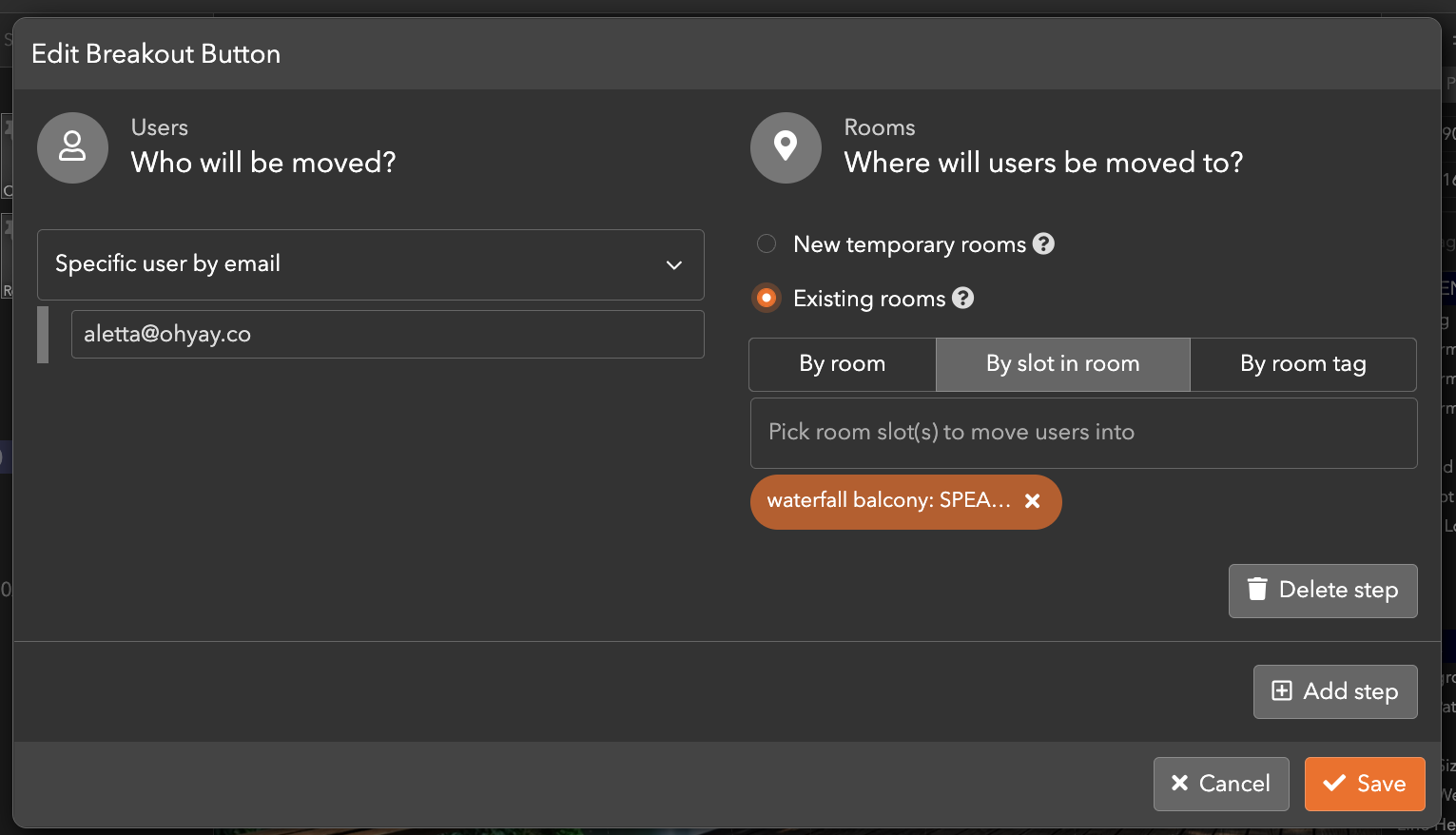 This breakout button moves all users in the current room into existing social rooms in the space (zen room, zen garden, waterfall balcony). 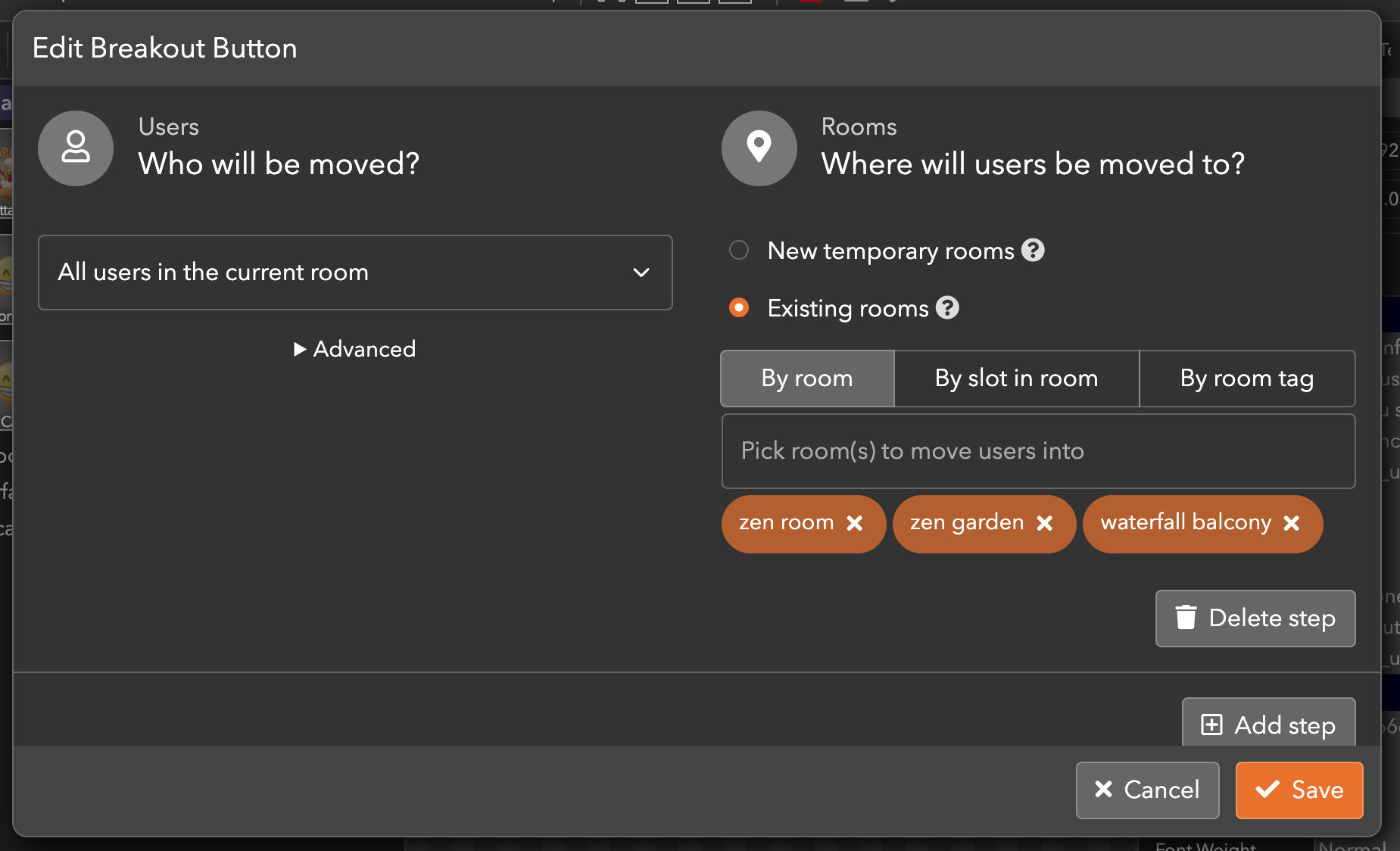 This button brings all users in the workspace (except pinned) to the waterfall balcony room. 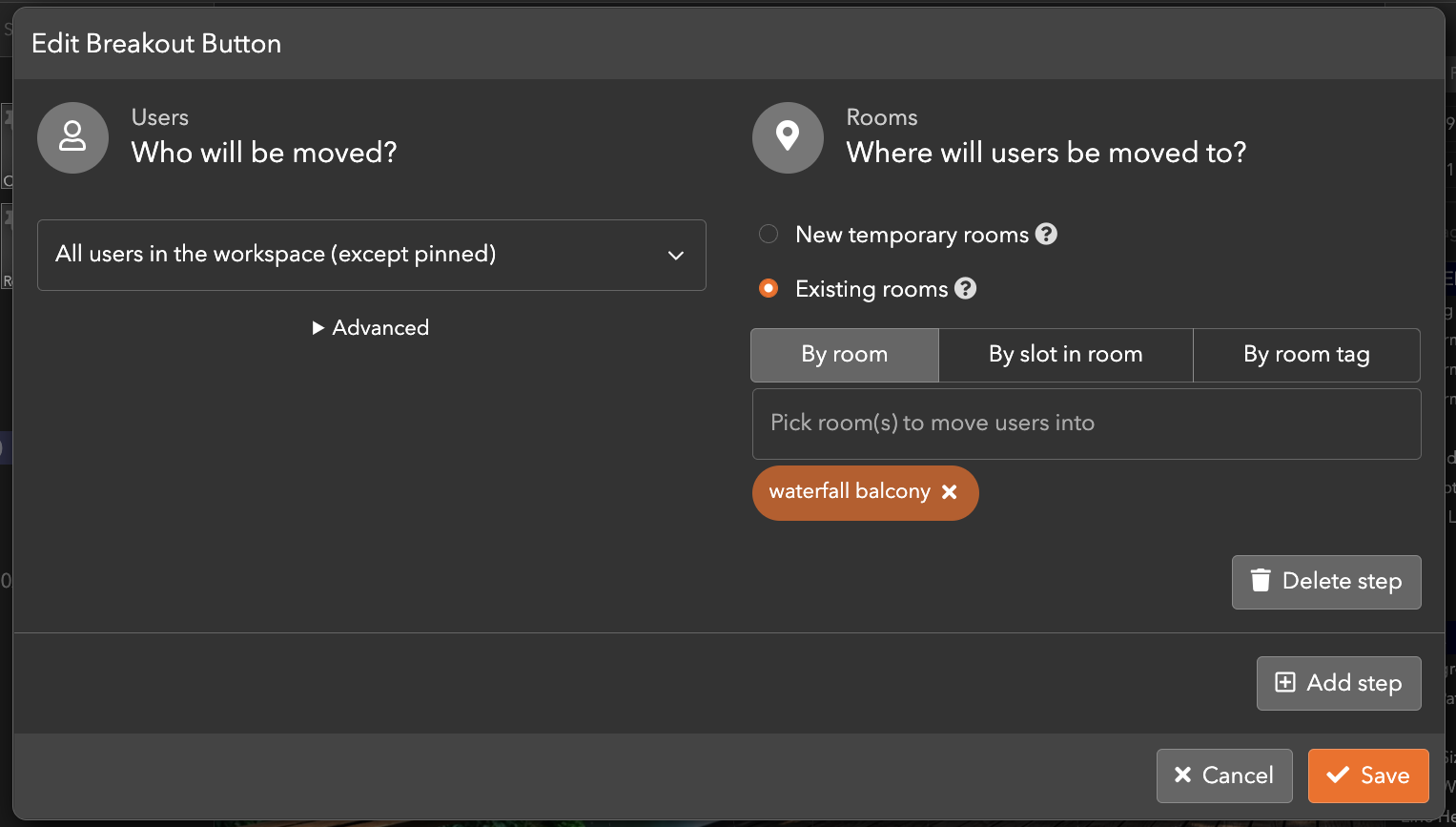 Curious what else you can do with Breakout Buttons? Check out some of our demo workspaces, chat with our creators in the discord, or head over to the community forums to ask!