Breakout Buttons let you control user movement in a space. They are very powerful and can be configured to do many different things related to moving users.

Breakout buttons will often be in the Notes and Controls section so only admins and directors can push them, to control the flow of an event. However, you can also put breakout buttons into the canvas and allow any user to push them.

The breakout button can be configured by clicking the pencil on the Config property.

There are 4 different modes of the breakout button: 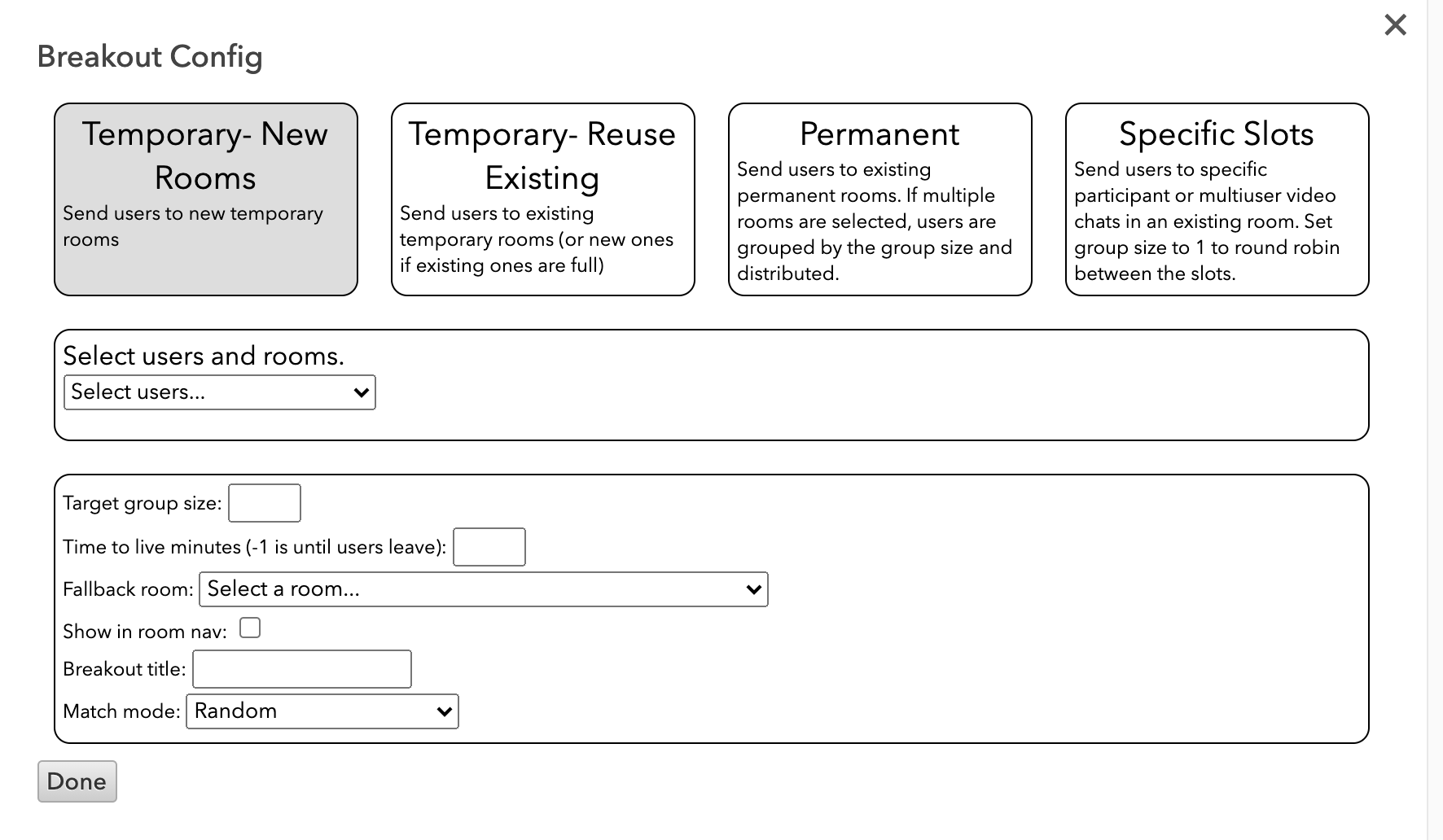 This mode will create new temporary rooms, and move certain users into those new rooms. The rooms will expire and be auto-deleted either after a certain amount of time, or after they are empty. In the middle section, you specify the set of users and the set of rooms. See Selecting Users.

The options are as follows:

As an example, let's say you have a Lobby room where everyone meets, and you want to break your students into groups of 4 to discuss a problem. You configure a breakout button to be a "Temporary- Reuse Existing", with a group size of 4, that moves all users in the Lobby room. There are 10 students in the Lobby when you hit the button for the first time. 3 breakout rooms will be created (Breakout 1 with 4 users, Breakout 2 with 4 users, and Breakout 3 with 2 users). Then let's say 5 new students show up in the lobby while the other breakouts are going on, and you want to send them to breakouts. Since your button is "Reuse Existing", it will put 2 of the 5 into the existing Breakout 3 room, and the other 3 into a newly-created Breakout 4 room. If instead, you had used a "Temporary- New Rooms", then it would create two new rooms, Breakout 4 and Breakout 5, and put 3 and 2 users in them respectively.

One room
If you specify one room, all the selected users will be moved to that room.

Multiple Rows
In permanent mode, you can specify "multiple rows". For example, the following configuration has 3 rows: 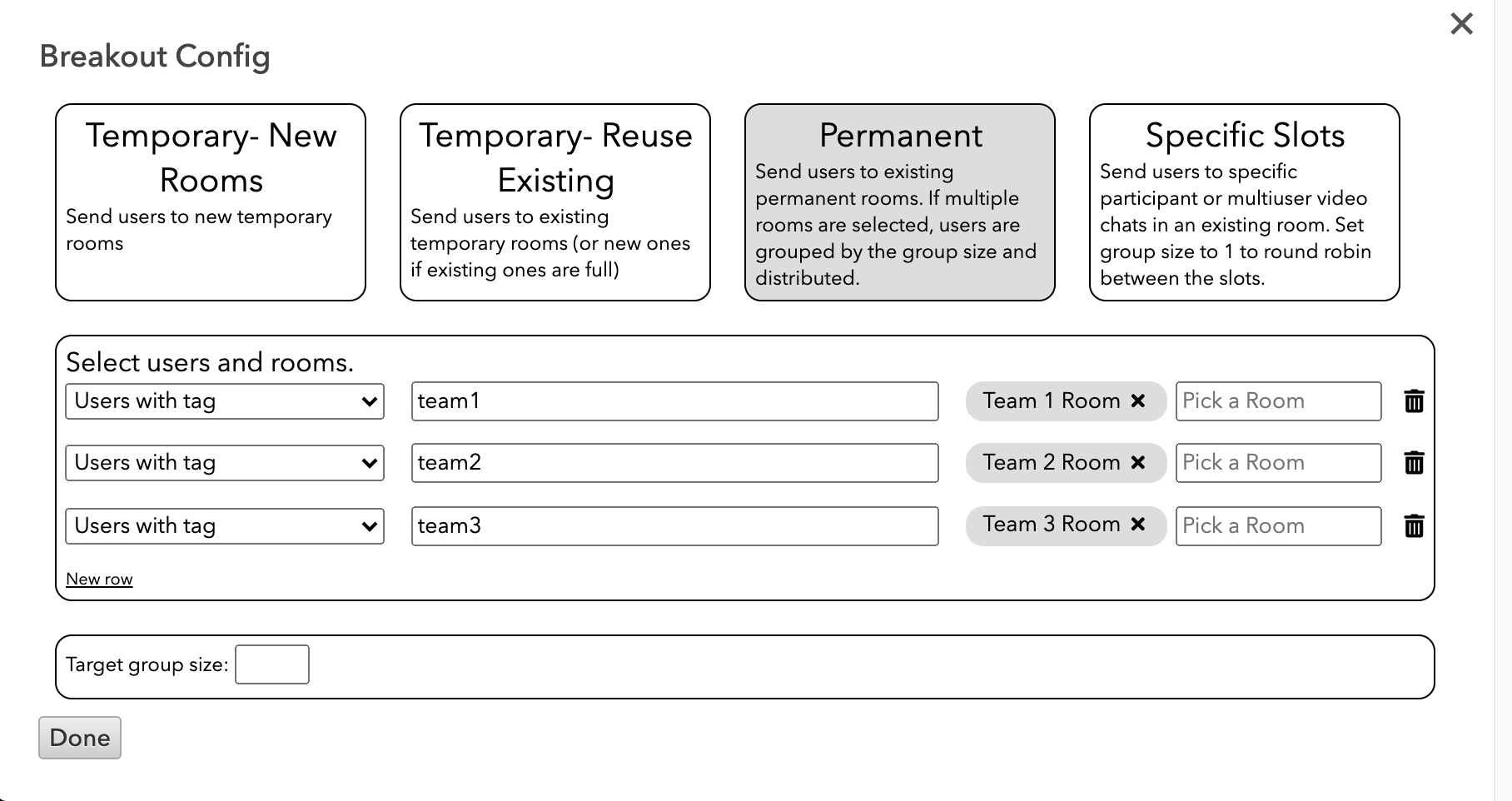 Linking to a room

You can use the breakout button to send the user who clicked the link to a specific room, but if you are just trying to make a simple link, it's easier to use a text element or image element and set the "Linked Room" property to the room you want to link to.

Specific Slots is similar to "Permanent", but instead of moving users to a room, it moves them to a specific slot (participant or multi-user video chat element) in a room. This can be very useful for moving a specific speaker into the speaker slot, for example. In the following configuration, the breakout will move the [email protected] user into the "Speaker" participant element in the Auditorium room. This will work whether or not Tony is in the auditorium (it will move him to that room if he is not already there).

Special ~Room~ Slot
There is a special entry in each room called ~Room~. If you choose this, the user(s) will be moved into that room if they are not in the room already. If they are in the room, it will unassign them from their current slot. The system may then decide to auto-assign them somewhere else. A common use case for this is if you have a manual multi-user video chat element for "Presenters", and you wish to have a button that will simultaneously remove anyone who is currently in the Presenters slot, and move one or more other users into it. You can achieve that with the following configuration:

In all breakout buttons, you need to specify which users to move. There are a number of options to choose from: 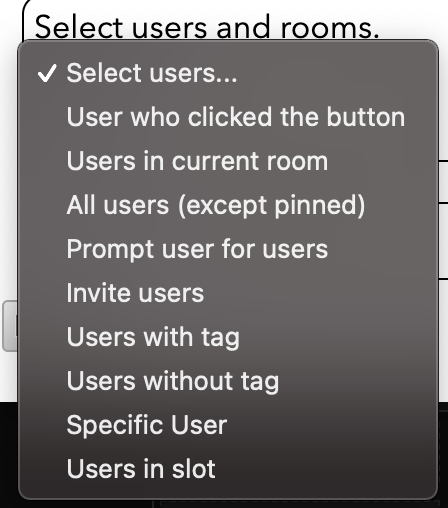 To bring all of your guests to one room, follow the instructions below.

Configure your "Bring All Here" button:

To turn off the message that pops up when you click on your button, asking "Are you sure you want to do the breakout?", you can click on "For all users only" next to "Confirm on Run" and select "No."

Bring All Here via menu

As an admin or director, you can quickly bring all users in the workspace to the current room you are in from the menu bar, under Users -> All Users in Workspace to this Room. If you don't have a preconfigured breakout button, this is a quick alternative option.

Pinning someone to a specific room means that you're tying them to that room and exempting them from all breakout buttons.

How to pin a guest (or yourself) to a room:

Now, your guest will not be able to move out of that room. This feature is especially helpful when you want to pin breakout room hosts to rooms before running a breakout session.

Break Out a Set of Rooms

Sometimes, it is useful to treat a set of rooms as a breakout target.

For instance, you may have a template room A that links to room B. When you create a copy of A, you may want to link to update so that it links to a copy of B.

This is useful for creating an escape room experience where multiple teams move through a set of escape rooms independently.

The Navigation Parent Room option only appears for elements that have "Show in Room Navigator" disabled. 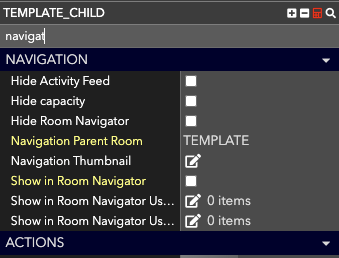